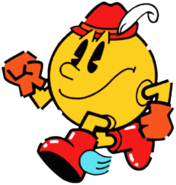 Pac-Land is an entry in the Pac-Man series of arcade video games, released into arcades by Namco, and its American distributor Bally Midway (now Midway Games), in August 1984. It was the first Namco arcade game to use the then-new arcade system later titled as Namco Pac-Land. Pac-Land features parallax scrolling for some of the background elements, a feature that would not become commonplace until the 16-bit console era began much later.
Pac-Land itself is split into trips. In each of these trips the objective is to get the fairy (that is kept under Pac-man's hat) to Fairyland and also to return home to Pac-Man's house. The majority of the trip involves moving from left to right avoiding various obstacles such as the enemy ghosts, water spurts and quicksand traps. Each trip is divided into a number of rounds, the end of which provides Pac-Man with bonus points depending on how much time he has left and also his position in jumping at the end of each round. If the player runs out of time before finishing the round, Sue, the purple ghost, will speed up rapidly.
The penultimate round of a trip ends with Pac-Man entering Fairyland and returning the fairy under his hat to the Fairy Queen. In return the Fairy Queen gives Pac-Man magic boots. For the final round of the trip, Pac-Man has to travel from right to left back home. For assistance he uses the magic boots, which allow him to jump repeatedly while in mid-air. Once Pac-Man completes the trip, he is greeted by Ms. Pac-Man and Baby Pac-Man. In the US release of the game, Pac-Man's cat and dog in the cartoon series, Sour Puss and Chomp-Chomp, are also there to welcome Pac-Man home. Pac-Man then begins his next trip following the same objectives as before, although the difficulty increases.
As in the original Pac-Man, there are fruit which appear to eat for bonus points and power pellets to turn the ghosts blue and vulnerable. A hidden item (sometimes accidentally dropped by the ghosts) is a Flagship from Galaxian, which rewards 7650 points when collected (a reference to Namco's goroawase number of 765). The Galaxian Flagship is a long running cameo that appears in the Namco-made Pac-Man games. There are also hidden bonuses in the game, eating ghosts in a certain order will give extra time and pushing an obstacle in the opposite direction can give extra lives, invincibility, and balloons to collect for points and warps.